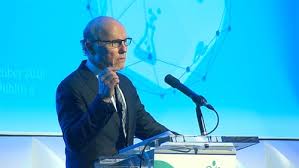 David McCourt, an Irish-American entrepreneur, has charged entrepreneurs to rethink their current approach to business. He says the 21st century business landscape is fast-changing, and only those who can think and act like a revolutionary will survive entrepreneurship.

McCourt points to the shift in how people consume media, the new development in politics, and demographic changes, as indications of evolving realities that must be embraced, reconstructed and bettered, if possible, to stay in business.

The entrepreneur who was onced described by the Economist as a ‘telecom revolutionary’ said:

“You have to be able to look at something and say, ‘I’m not going to try to change that. I’m going to totally rethink that’. Look at it from a different angle. Instead of battling an existing construct, learn to rethink it from scratch”.

He specifically emphasised that the the business ideas that will thrive in the 21st century will have to be woven around “Anything that cuts out the middleman. Anything that’s infinitely scalable. Anything around the internet of things, artificial intelligence, or bringing connectivity to the underserved.”

More,  he said he believes in small businesses challenging the larger, well-established corporations heads on. For him, there is a great reward awaiting any entrepreneur who does that successfully.

He admonished all SMEs to “think of the big global problems right now, the costs of healthcare, education, and housing ” as the locus of new enterprise solutions.