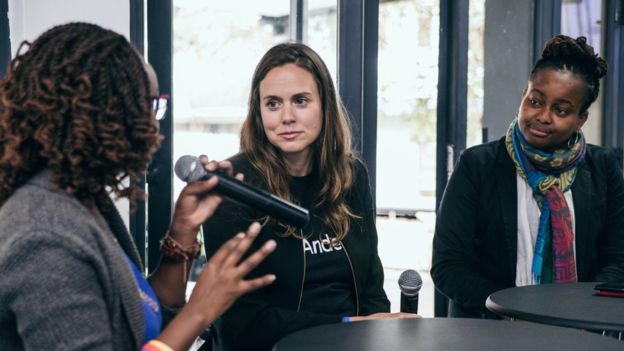 See how Andela is building new generation of young techpreneurs and engineers in Nigeria, Africa

Christina Sass learned at an early age to spot talent in new places. She went on to found Andela, a firm that recruits software engineers in Africa.

One autumn, at the start of a new school term, she found half of her class had been replaced with black students from a much less affluent part of town.

“Busing” children between schools was a policy designed to integrate divided communities, and she remembers it causing “a huge uproar” in the US state of Georgia when she was growing up.

She was fearful at first herself, but the experience turned out to be overwhelmingly positive.

“Sure, it was a bunch of new people who had a different experience in life. But three years later we were all close friends,” she says.

And as they got to know each other, watching people from both backgrounds “excelling academically, excelling at sports and excelling in the arts” she gained a useful insight: “brilliance is evenly distributed”.

That nugget of wisdom, became the motto behind Andela, the firm she co-founded in 2014 to tap into unexploited IT talent across Africa.

This matchmaking idea has caught the imagination of some high profile investors, with the Chan Zuckerberg Initiative, and US tennis star Serena Williams amongst those putting money into the venture.

Although Andela is a for-profit company, not a charity, there’s a strong social motivation behind it.

Throughout her childhood, Ms Sass says her father pressed home the message that gaining qualifications was the key to a good career.

He himself had arrived in the United States in the late 1960s from a divided Germany, with little English and only $200 in his pocket. He’d found work at a warehouse for IBM and thanks to the company’s support, over the years he worked his way through night school and a degree, gaining promotions as he did so.

She was taught to value education above all else. But after working on educational projects in south east China and the Palestinian Territories, Ms Sass began to wonder whether education was enough.

“I heard this constant drumbeat, that no matter how much people were willing to invest in their education and themselves it still didn’t translate into a job,” she says.

“My interest shifted. After those two to three years in the field, I was thinking, the way to crack this nut is not to focus on quality education it’s to focus on that transition between education and employment.”

Her father, who passed away when she was in her early twenties, remained a profound influence on her, motivating her to “make things happen”. And she set about establishing Andela with co-founder Jeremy Johnson, an educational technology specialist.

They realised there was a glut of IT talent in Africa and, on the flipside, a desperate need globally for qualified software engineers with the right kinds of skills.

When they first called for applications in Lagos in 2014, after “wearing out their shoe leather” spreading the message, thousands applied from across Nigeria.

“We knew we’d find great problem solvers and logical thinkers,” she says. “We just knew the level of talent that was there.”

The numbers were whittled down by a rigorous selection process and the Andela model was born.‘

Although around 80% of Andela recruits, already have degrees in computing, they all undergo six months of training to learn soft skills, like negotiation techniques and team working. Only then are they paired up with suitable clients, which have included the BBC and IBM as well as many of the Fortune 500 and Silicon Valley start-ups.

Crucially, though, the recruits don’t relocate. Instead they work remotely.

And whilst international firms pay Andela the going rate for a qualified engineer, the employees receive only a third of that. The rest goes back into Andela to support the matchmaking service and to expand the business.

“Andelans” are tied to working under these terms for four years. After that they can take up employment overseas if it is on offer, or stay on in their home countries.

Some observers worry Andela could exacerbate the brain drain, smoothing the way for the most talented engineers to find employment outside Africa. Firms in Lagos, Kampala, Kigali and Nairobi can’t compete with the salaries and lifestyles on offer abroad. And if IT specialists have been provided with the skills, and the contacts with western firms, it may make it easier for them to leave.

“We have a love-hate relationship with Andela,” says Yinka Adegoke, Quartz’s Africa editor.

“They’ve been great for showing [that] startups in Africa can raise money, but no African startup can afford Andela.”

But while the brain drain is a real danger, agrees David Adeleke, editor of Business Insider Sub-Saharan Africa, talented workers who go overseas “often return or at least facilitate knowledge sharing and in the process, significantly help improve the ecosystems they departed.”

It’s early days to see what path most will take, but Andela says of the first batch of alumni, more than 90% are still working in Nigeria.

Ms Sass’ dream is that many of the 1,300 developers now working in hubs in Nigeria, Kenya, Rwanda, Uganda, and smaller offices in Ghana and Egypt will want to build their own start-ups, once their time with Andela is up.

“Our ultimate goal is to have Andela alumni as the next tech leaders in Africa,” she says, maybe even Africa’s own Bill Gates she muses.

But she herself is now ready to move on to new projects. She’s stepping back from her day-to-day role, though she’ll stay on as chairman of Andela’s advisory council.

Next on her agenda? “Andela operates at the high end of the skills spectrum,” she says. “I’m thinking about how do you do that for people who are not.”

Culled from the BBC