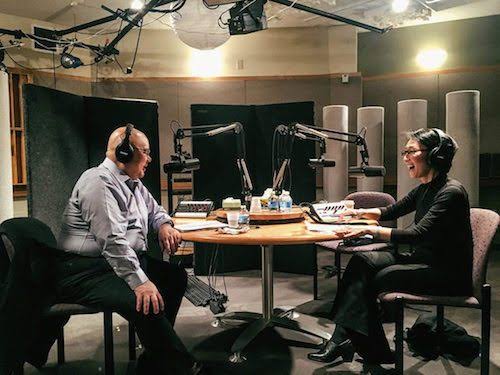 One night 15 years ago journalist Ben Hammersley was on a deadline at the Guardian newspaper, writing a column on internet radio blogs.

He filed the piece and then, just as he was packing up, got a last minute call from the subs desk (the team that give stories a final check).

“They said: ‘We need one more sentence – just to fill the page,'” the British writer says.

“So I wrote something pompous like: ‘And what should we call this new phenomenon – audioblogs? How about podcasts?'”

A few months later Ben received a call from the Oxford English Dictionary.

They said they couldn’t find any earlier citation of the word “podcast” and asked if he had really made it up?

Yes, he had. Podcasts may not have been born that evening – but they had been christened.

A decade and a half later, what had been a motley collection of what Mr Hammersley calls “mostly unlistenable” MP3 recordings has become a global industry

Podcasts are now produced by commercial broadcasters, individuals and companies with no connection to broadcasting. In fact anyone with something to say, and a few pounds to spend on the equipment to say it, can get involved.

The digital audio files are cheap to produce and, thanks to the internet, easy to distribute.

Mr Hammersley says two changes transformed the market – one cultural and one technical.

A technical breakthrough came in 2012 when Apple produced the iPhone podcast app, which proved a popular library system for listeners.

This was followed by a dramatic improvement in inexpensive recording production and editing equipment.

Finally, the development of 4G mobile phone connections and widespread wi-fi meant listeners could browse, download or stream shows whenever they wanted.

The cultural breakthrough came in 2014 with a very specific podcast – Serial, a piece of investigative journalism hosted by Sarah Koenig, narrating a non-fiction story over multiple episodes.

To date, the first and second seasons of the show have had more than 340 million downloads

“Serial changed everything. By the time it got into series two, the advertising space sold out in a day for sums that went into the millions,” Mr Hammersley says.

“That was the point at which the advertisers started to catch on to [podcasts’] value,” she says.

Today we are in the middle of a podcast boom. In the UK nearly six million adults tune in each week, about double that of five years ago, according to the telecoms regulator Ofcom.

Podcasts are now available on a wide range of platforms, with streaming sites like Spotify competing with downloads.

And where the audience goes, the money follows.

It’s not the size of the audiences that is important to advertisers, it’s who they are. Podcasts offer a chance to speak intimately to a very precise selection of people.

A half-hour podcast on, say, 1950s sci-fi novels, is going to hit a very specific audience. If you want to target gaming fans you go for a gaming podcast. That specificity can be worth a lot of money.

The Stockholm-based podcasting platform Acast say that average industry rates for podcast advertising range from $18 for a 30-second ad to $45 for a 60-second sponsor read, for every thousand listeners. That’s 50-100% more than broadcast radio advertising.

But podcasting advertising comes in many forms.

The first is similar to what you would hear on traditional radio – in other words, professionally produced adverts for products or services.

But there’s a slight difference. Such ads have to be “less shouty and more subtle” to work in the more intimate environment of a podcast, says Joe Copeman, the managing director of Acast.

Then there is sponsorship. In the early days this was simply a case of the podcast host dropping a glowing reference to the sponsor’s name into the script.

But increasingly hosts are recording adverts themselves, which are then edited into the show.

On top of this companies are making their own podcasts, to help draw people to their brands.

Such marketing can be powerful when it’s done well, says Mr Copeman: “It is great to be in that space where people are immersed in the sound of a person’s voice, where they are enclosed in that world.”

The boom in podcasting embraces a huge range of talent, from professional broadcasters to enthusiasts offering insights on anything from off-the-wall conspiracy theory to whale watching.

In fact, as Ben Hammersley explains, podcasting has brought people into broadcasting who would normally never have seen the inside of a recording studio.

“There are of course professional podcasters, but there are many more people who create quality content and do it for nothing,” he says.

And that is changing not just the way we listen to audio but the way the broadcasting industry works.

“If you are a 20-year-old just out of college, wanting to be a radio producer and full of ideas, what do you do?” Mr Hammersley continues. “Go and apply for a job in local radio and end up making the tea for three years? Or go straight into making programmes for podcasting?

“That’s something the main broadcasters haven’t yet really accepted, but that is the way it’s going.”

Of course if you are a celebrity, podcasts can provide a new branch of business.

Jo Wood, ex-wife of Rolling Stone Ronnie Wood, and long convinced of the existence of alien life, this year launched Alien Nation. It hosts “other celebrities, experts, and everyday earthlings who have had close encounters or simply think we cannot be the only planet with life in this vast universe”.

The singer George Ezra has done a series of “George Ezra and Friends” podcasts, in which he interviews other famous musicians such as Lily Allen, Ed Sheeran and Jessie Ware (who has her own podcast called Table Manners).

“For these artists it’s less about sales as about exploring new areas,” says Mr Copeman.

“Jessie [Ware] has really been able to monetise her podcasts and attracted sponsors, but she has also opened a way into another profession, testing out her presenting skill.

Culled from the BBC.