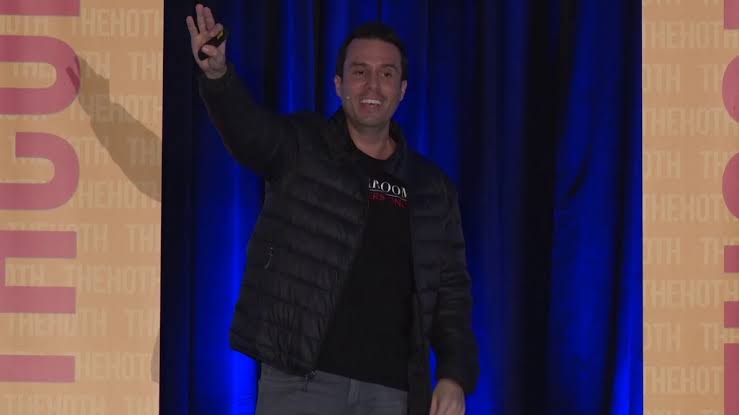 Selling your product or services successfully boils down to your ability to make people commit to you – Robert Adams, sales expert

Everyone is selling something. Therefore, selling is the greatest profession on earth. Acquiring or learning selling skills is a prerequisite for wealth. In this excerpt clipped by hustle24, from Entrepreneur, Robert Adams, a sales expert, teaches the power of commitment, and how to get your prospect to commit before making your offer.

In a recent conversation with influence and persuasion expert Michael Bernoff, I dug deep into the science and strategies behind the ability to get someone to buy something from you. Considering that much of our thoghts and our actions are born from our unconscious mind, your ability to leverage and control that, not only in yourself, but also in others, will dictate your chances for success.

This information is applicable just as much as it is in the real world as it is in the digital world. Bernoff’s understanding and knowledge is also the basis for many of the techniques and strategies taught by some of the greatest online marketers such as Tony Robbins, Russell Brunson, Ryan Deiss, Jay Abraham, Frank Kem and others. It all boils down to your ability to get people to make a commitment to you.

For example, ever wonder why, at an event such as a mastermind or marketing conference the speakers will get you to somehow agree with them about a certain concept or principle? They’ll either get you to stand up or raise your hand in agreement with whatever it is that they’re saying or asking. The best part? It doesn’t matter how small of a commitment they get from you, as long as they get it, that’s what matters.

They’ll tell you to raise your hand if you agree with some blanket statement that likely invokes a ‘yes’ response from just about everyone in the room. Or, they’ll get you to stand up and raise your hand. While these directives might seem very subtle, they’re setting the stage for something very powerful: the offer.

In webinars, you’ll see this happen all the time as well. Jason Fladlien, arguably the best webinar pitchman on the face of this earth, talks about doing this very same things. The secret to building out a winning webinar? Get people to commit to things. It doesn’t matter how small of a commitment it might be. Just get that commitment.

Tripwires and free-plus-shipping offers work in very much the same way. You get someone to commit to something small, even if it’s $1, you can both easily identify your buyers, but then also get a very small commitment. This forms the basis for most of the mechanics behind online marketing. It leverages our innermost psychology with our tendencies toward certain behavioral patterns. Sales funnels are founded on these very principles. A funnel automates the process of selling something to someone, but it invokes the underlying principle of getting a solid commitment from the prospect. A prospect commits to you when they provide you with their email address and download or access your lead magnet. They also commit if they order a free book from you and simply pay the shipping-and-handling fee.

However, the best funnels also interweave commitments into things like the email sequences. They train prospects to click on links or respond in some other fashion. All of these are examples of commitments, and their power is most often understated, especially from the outside looking in. However, this one single force is the underlying technique used by the world’s most savvy marketers and salespersons to propel sales into the stratosphere.

4 Steps to Influence Your Prospect

Over the past 15 years, Bernoff has perfected a variety of methods for influence and persuasion that he often teaches around the world. It involves something called micro-commitments. The reasoning? Get people to agree with you on three small details, and the 4th is almost in the proverbial bag.

How powerful is this information? It could quite literally transform your business. There is real power in commitment. For example, when you verbally commit to something, it flips a switch in your mind. You can lucidly envision it. This is incredibly powerful during sales interactions or even things like hashing out contracts and other in-person, real-time negotiations.

It’s also the basis for setting goals and building out habits. For goal setting and habits, when you make not just a verbal commitment, but one that’s written down on paper, studies indicate that you’re far more likely to succeed. With habits, the commitment is invoked when you follow through each time. Every follow-through is one more notch in the commitment belt. String them all together and you can quickly form a good habit or break a bad one.

When it comes to the actual four-step process of getting a prospect to commit to you, Bernoff explains it like this. The reason why this works is because it lowers a person’s resistance and answers the magic question of what happens next. It also makes a prospect feel more comfortable when there’s an actual process in place to follow, making it a straightforward and very powerful selling tool.

Step 1: Get the prospect to commit to the process.

Bernoff explains that the first step is rather simple. It involves expressing a question that you’re almost certain to get a micro-commitment from the prospect. You simply say something along the following lines. “Our company has setup a 4-step process and it’s very simple. The first step is that I want to make sure we get along. If you’re comfortable, we’ll move to step 2.”

Your goal? Simply get them to say yes. Might sound silly to you. But, Bernoff explains that this is part of the overall influence strategy and of harmonizing the prospects unconscious mind with the process. By saying yes, you’ve just received the first in what will likely be a string of four vocal affirmations.

The next step in the process is to help the prospect identify the problem. Once again, you’re looking for a micro-commitment here. Get them to agree to move forward by telling them that you want to find out what they’re looking for. They’ve already agreed to the process, now they’re agreeing to actually move forward, which would give you your second commitment.

In the next step, ask the prospects if you can show them your solutions. This is your third commitment. In the laws of persuasion, the saying goes that if you can get people to commit to the first three things, the fourth will automatically be true. Bernoff puts it like this. If you were to give someone three great stock picks in a row, you’d sure bet that they’d most certainly be all over the fourth one.

In this step, you’ll be showing them all the solutions that you have for their problem. If you’re selling coaching services, this is where you lay out the different plans. Show them flow charts and testimonials, and specifically how you’ll address their pain point. Make your pitch relevant and organic to whatever it is that they’re dealing with.

Step 4: Allow them to pick what’s naturally best for them.

In the last and final step in the influence-selling process, all you need to do is allow them to pick the option that’s naturally best for them. Bernoff tells me that the word ‘naturally’ is an influence word, and it should be used in this step when allowing the prospect to select the best choice that’s right for them.

At this point, the prospect has already given you three micro-commitments. You’ve primed their unconscious mind to say yes. They might not realize it, but you’ve just lowered their resistance level and increased the receptivity for your fourth and final step here. No matter what you’re selling, you can use this process to close sale after sale. It works almost religiously when used properly.