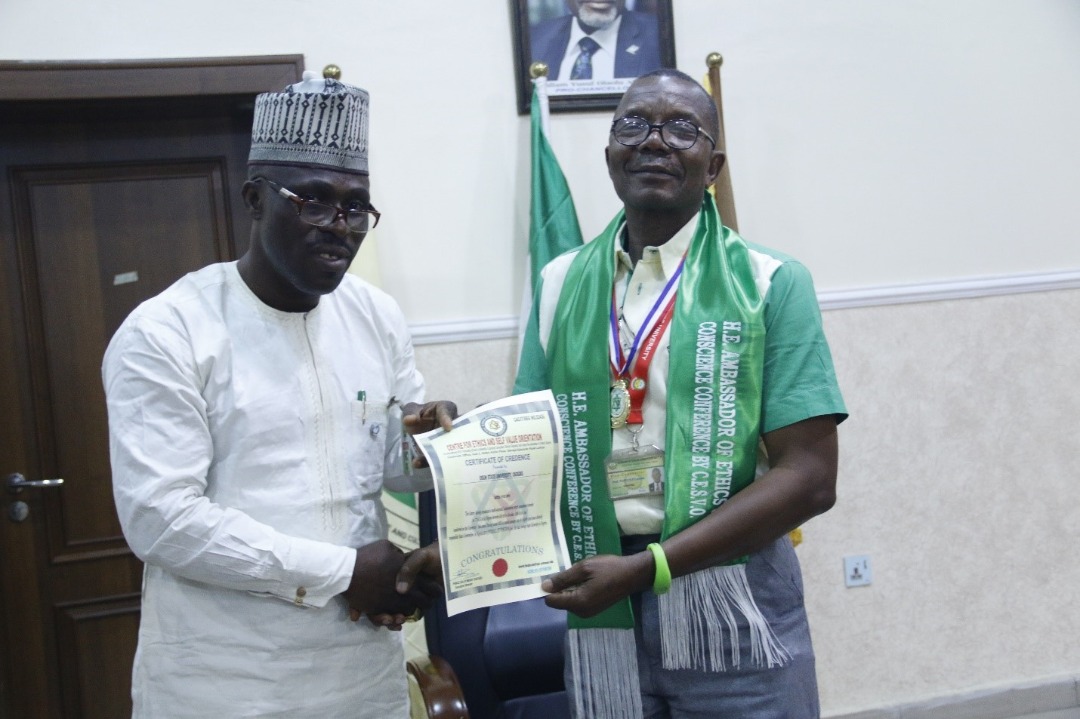 The Vice-Chancellor of Osun State University, Professor Labode Popoola, and other principal officers of the University were recently commended by the Centre for Ethics and Self Value Orientation (CESVO) for their exemplary leadership. The university chieftains were awarded after a thorough investigation were carried out to assess the university’s value system.

The Executive Director, Prince Musa Yakubu said, “we at CESVO are secret investigators that annually engage in the conduct of annual independent secret assessment, survey, investigations, and research on the policy and project performances of government at all levels including the character evaluation of leaders in both public and private MDAs/organizations privately or publicly owned. We expose corruption and in the process honor those who show leadership in accordance with ethical standard, we advise where necessary and we build capacity of workers toward strengthening institutional capacity for effective and efficient public service delivery”.


“Based on our 10 thematic areas of secret assessment, Osun State University ranked 1st overall having cumulatively scored above a benchmark of 79% in our ethical assessment criteria making the University the least corrupt state University in Nigeria,” Prince Yakubu added.

Reacting to the presentation of award to the University and its principal officers, the Vice-Chancellor, Professor Labode Popoola expressed his delight and promised that his administration will continue to uphold ethical standard to ensure transparency and accountability.
The Vice-Chancellor was thereby decorated and given the title ‘An ambassador of Ethics and Man of Conscience’ while the Deputy Vice-Chancellor Admin & development, Professor Janet Olaitan; the University Registrar, Mr Gafar Shittu; The University Bursar, Mr Bolarinwa Feruke and the University Librarian, Mrs Tinuade Adewale were issued a professional ethics compliance award certificate for being service compliant. In addition a letter of intent to train one hundred (100) of UNIOSUN staff on leadership and ethics compliance for free was presented to the school.